Kaylee was starting to get restless. The baby was not due for a few months and everything in the nursery was finished and waiting for their daughter.

The email telling them that their next box had been shipped had showed up in their inbox, but the box had not been delivered yet. Since they had already looked over everything in the first two boxes and done all the research they felt they could on it, they were left with nothing to do. Or maybe not… While they were having a dinner of yet another pasta dish, Korbin came up with an idea. “We have not checked out the website they keep putting on the letters. Maybe we should do that.”

Kaylee nodded around the mouth full of spaghetti then swallowed. “Maybe there’s some clues on the website that we haven’t seen yet.” Once they finished eating, they settled in front of the computer. Korbin typed in the web address for Listening Friends of America. They went through the links on the page and stopped at the Inspector Notes Database.

“Kaylee, bring me the envelopes the things came in. There were inspection stickers on them.” 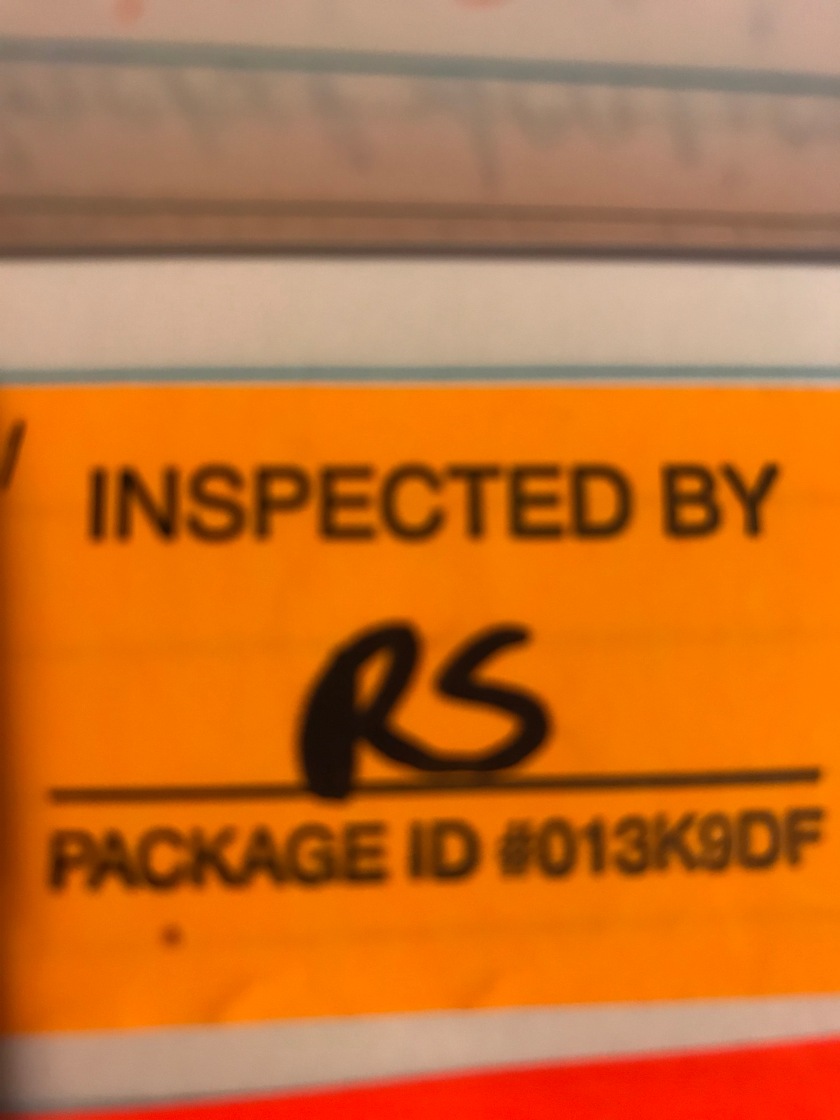 Korbin followed the directions on the page and smiled as a new page showed up. 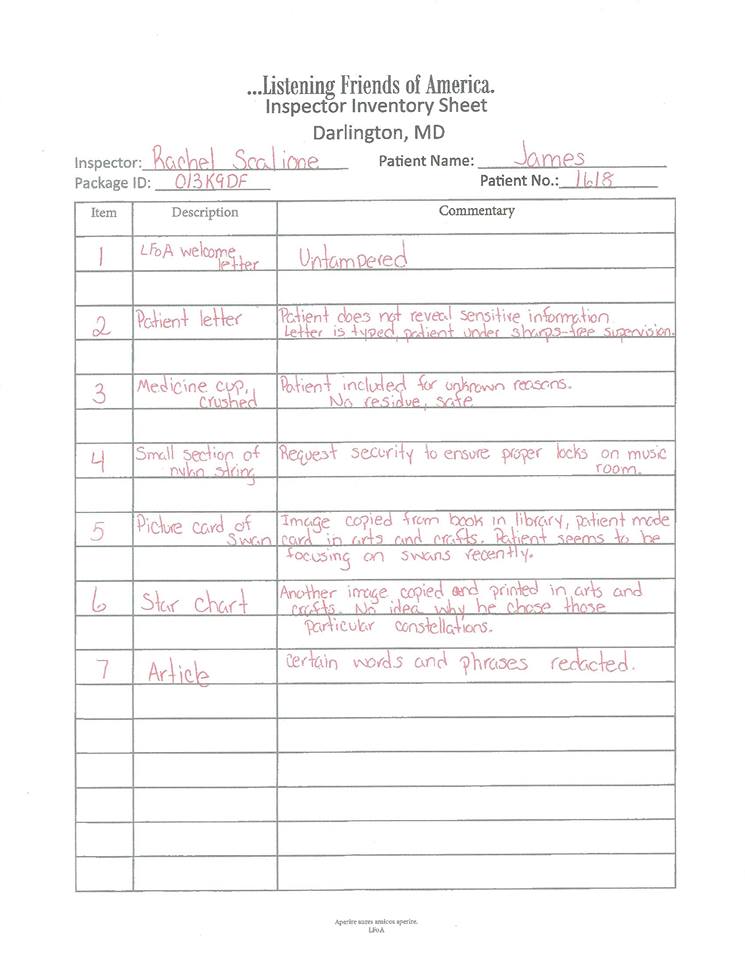 Kaylee pointed to the line marked 4. “We were on the right tract with the harp string.”

That made them both feel better about the things they had already come up with.

Korbin put in the information for the second box. 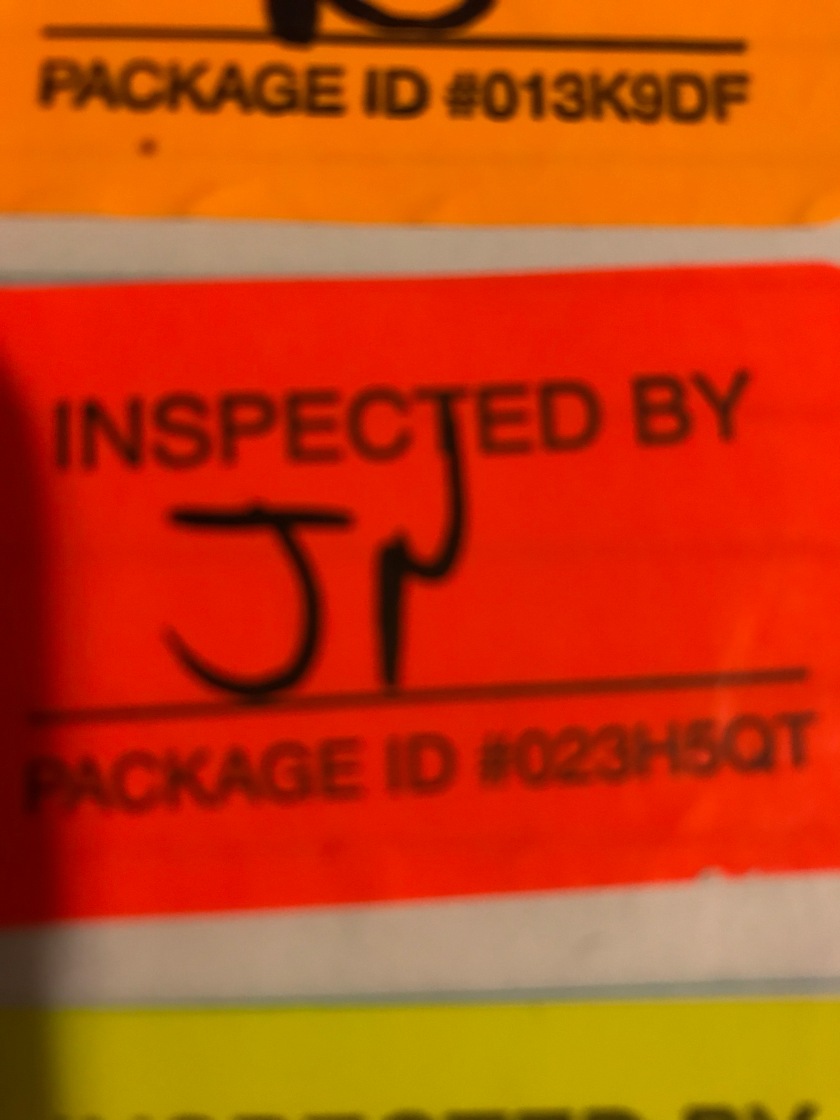 They pulled up a page similar to the first. 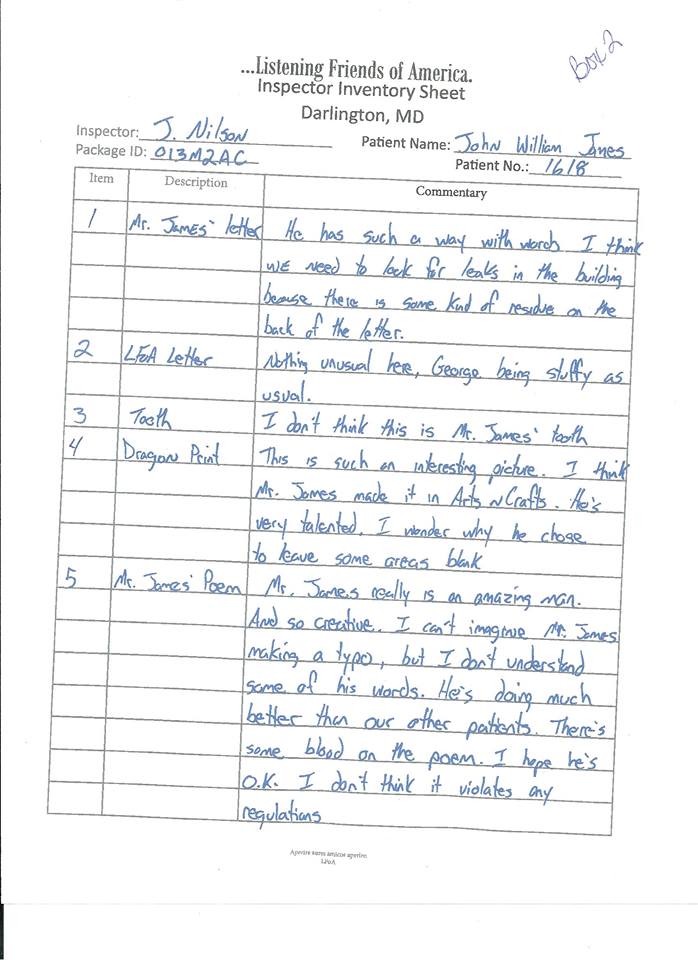 “This inspector seems to really like our killer friend.”

Kaylee nodded and frowned a bit. “I wonder if this inspector is going to let things come through that normally wouldn’t. He did let that tooth pass inspection after all.”

“If he sends the rest of the dragon to go with the tooth, I’ll slay him for you. My princess will remain safe in her tower.”

Kaylee couldn’t help but giggle. “My knight in tarnished armor. How lucky I am to have you to protect me.” She kissed his cheek then pointed at the computer. “The princess orders her knight to continue searching the website for more clues.”

They didn’t find anything else of use or interest until they clicked on the Archives link. At first glance the newsletter did not provide much information.

“Let’s solve the puzzle. My grandfather used to do these in the Sunday newspapers. I think I can do this.”

Kaylee wrote it down then sat down to work on it.

It took her awhile, but she finally figured it out.

“There seems to be a typo or something in the puzzle. They have a p instead of an r in Brazil.”

Korbin looked at her solution. “Let’s see if we can find any 25 year old pilots who crashed on their way to Brazil.”

He searched Google and found a lot on crashes near and in Brazil. Finally he found one that looked promising. “I think I found it.”

He showed Kaylee the page about Paul Redfern.

“So the switched P and R are a clue to the pilot’s initials. Since it says The pilot was born this year, the year he was born is a clue to something.”

Korbin looked over the article. “This doesn’t say when he was born.”

Korbin wrote that down in their notebook. “What is that a clue for?”

Korbin remembered something he had learned from a hacker friend and typed something onto the computer. This brought up a new unlinked page on the Listening Friends of America website. He typed the 1902 into the box and looked at the results. “1618…isn’t that the number on the back of the letter when we put the light on it?”

“Yes. That has to be what the clue is leading us to.”

They clicked on the link which led to yet another link.

“An audio file.” Korbin turned up the volume on the computer so they could both listen to it.

(transcript of the audio file) 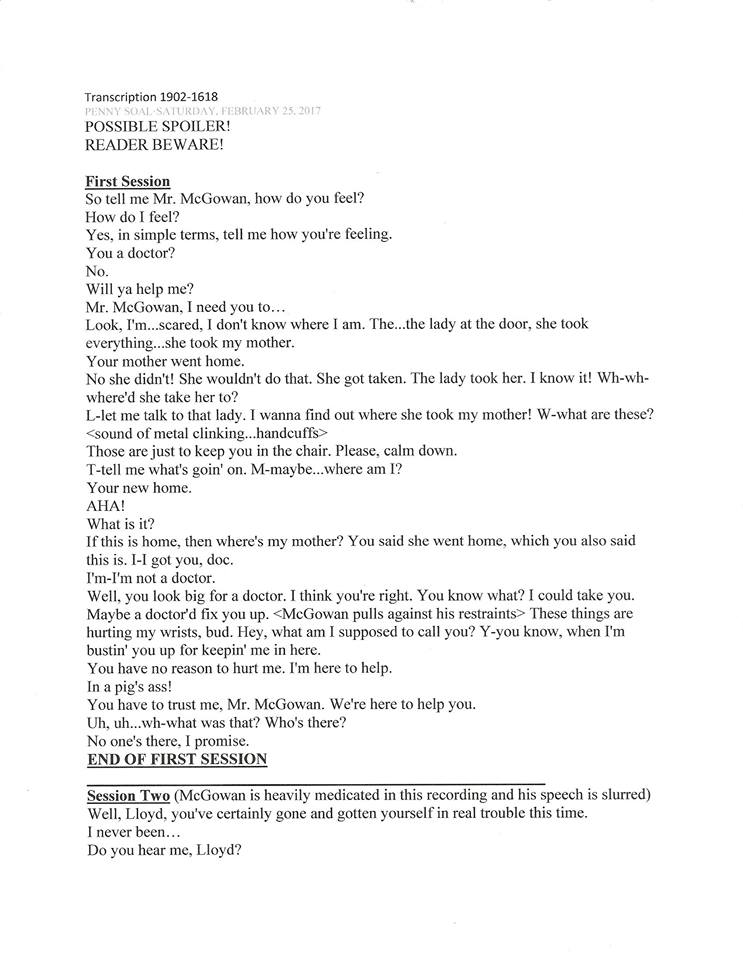 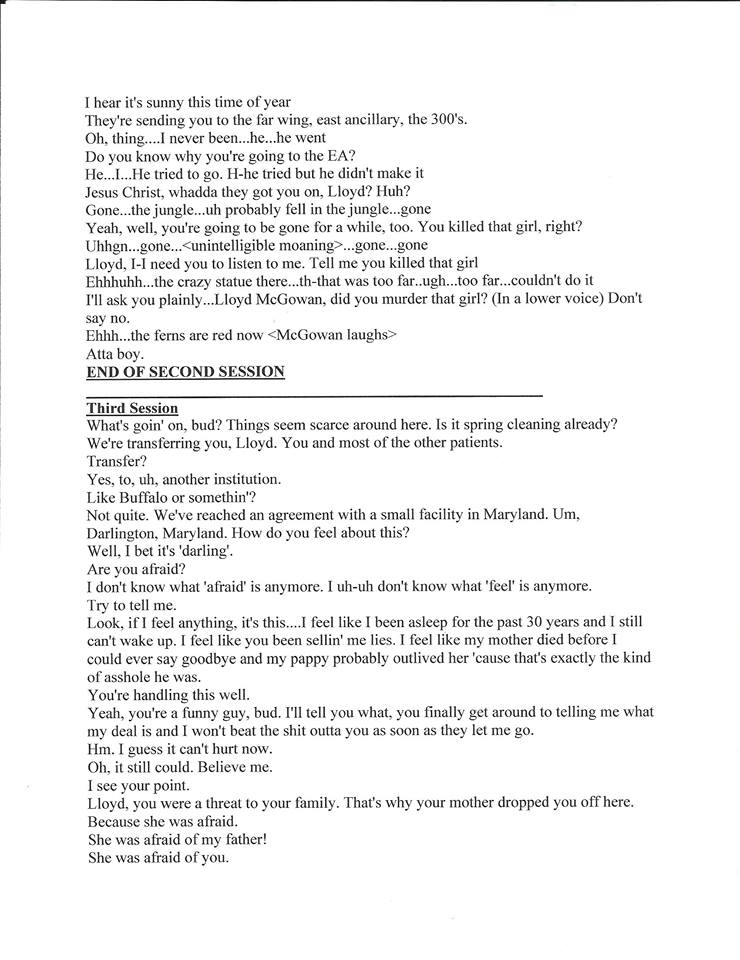 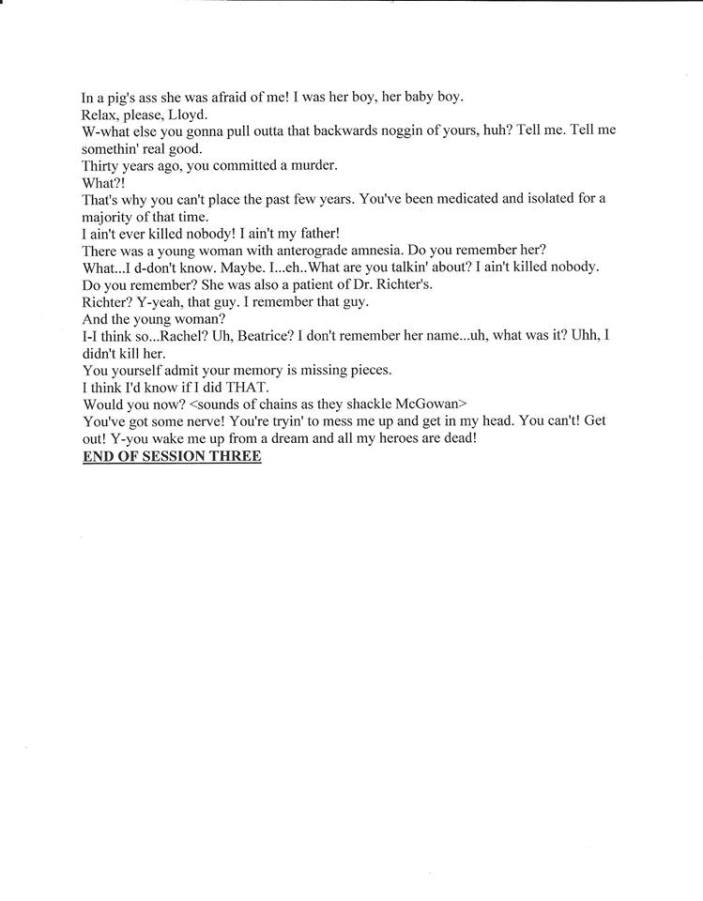 Kaylee looked at Korbin frowning. “That was weird. You could tell he was drugged in that second part. And it really sounds like they are telling him that he killed the girl, not asking him.”

“Like they were convincing him that he did it.”

She nodded agreeing with him. “That convinces me even more that he did not kill Lillian. I really think it was that doctor. Why else would he try so hard to convince Lloyd that he was the killer? He is trying to pass off the crime onto a poor drugged man.”

Kaylee sat down and sighed. “I think I’m done for today. After listening to that, I want to go do something fun. How about a trip to the city for some karaoke?”